The Creature Shop designed, built, and maintains a fleet of walk-around polar bear costumes in Atlanta, Orlando and Las Vegas.

The Creature Shop designed, built, and maintains a fleet of walk-around polar bear costumes in Atlanta, Orlando and Las Vegas.

The Coca-Cola polar bears are widely beloved, and people embrace the chance to meet one in person, part of the Coca-Cola experience at Coke stores. The bears have also made appearances at the Olympics, the New York Stock Exchange and other high-profile live events. 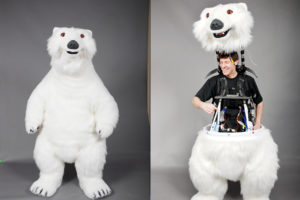 The Creature Shop relied on the prime time/commercial experience and expertise of its artists and applied it to engineering a polar bear suit—with the attention to detail of a television show or feature film character, yet sturdy enough to endure the rigors of day-to-day, live appearances.

The head of this iconic bear is a hand puppet with mechanics that operate eye blinks and ear wiggles. There is a camera in the nose that gives the performer a live image of what is in front of the bear.

In order to allow for performer comfort and to accommodate both left and right arm dominant performers, the costume is specially designed to allow the performer to switch arm positioning within the suit during performances.