Earth to Ned is a show about an alien whose plans for world domination are foiled by his budding love of all the pop culture Earth has to offer. The Creature Shop designed and built all puppet characters for this critically acclaimed Disney+ talk show series hosted by the alien Ned, the most complicated animatronic character ever built; his sidekick Cornelius, a more traditional hand puppet; and their spaceship minions the Clods, simple rod puppets.  The Creature Shop also designed and fabricated original costumes and props for the puppets, including several memorable Bob Mackie Cher looks for the Clods.

Additionally, one of the members of Ned’s crew of space misfits comes in the form of the AI of the ship itself, a hyper-intelligent digital cognitive entity named BETI. BETI is made of electricity, has a rebellious attitude and, unfortunately, happens to also be in control of all the ship’s life support functions. Because BETI’s CG performance would be largely improvised, the character was realized using the Emmy Award-winning Henson Digital Puppetry Studio.

The Jim Henson Company wanted to create a character that pushed the boundaries of puppet creation and performance. Brian Henson challenged the Creature Shop to build a creature unlike anything before.  Ned takes six puppeteers to operate; has 32 servos in his head to create countless expressions, especially when combined with his four arms; and sits behind a desk four feet off the ground!

For BETI, real-time rendering was used to make the CG character look like she was made of electricity. This also allows her to appear on stage as a live character in final resolution, without the use of post-production. Having BETI live allowed celebrity guests to interact with her as though she were any other performer. 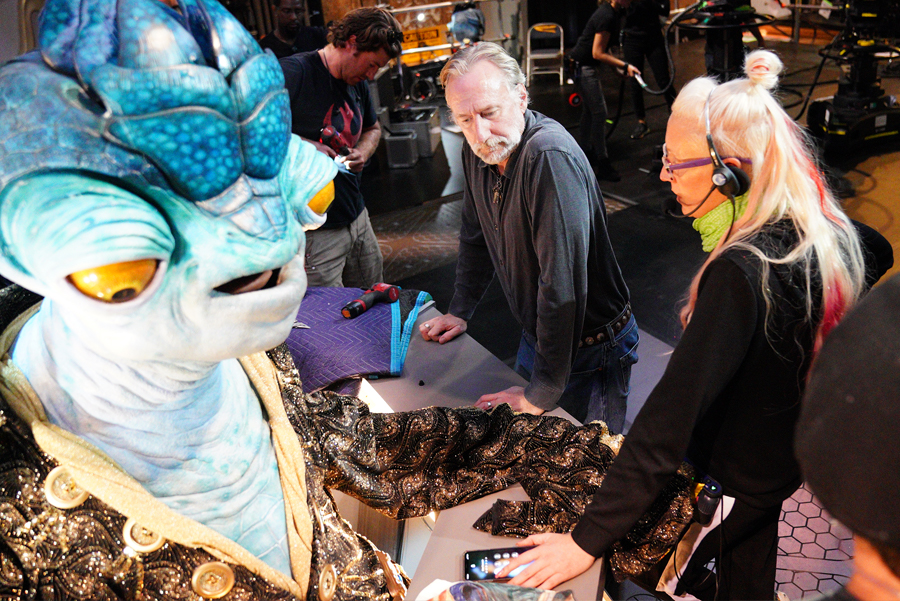 In designing the show’s puppet cast, Brian Henson provided descriptions of the characters’ personalities and guidance on their appearances.  The Creature Shop finalized designs on paper and then created foam mockups to help visualize shape and scale.

The Creature Shop sculpted and molded Ned, Cornelius and several different Clod heads and tentacles and cast them in foam latex.  Foam latex is lightweight and pliable, so it allows for animatronics and mechanisms to move within the skins. In order to achieve a fully realistic look to these characters, each one was finished with a bespoke paint and art treatment, as well as custom wardrobe elements.

Animatronics were built and programmed for Ned and Cornelius’ facial movements, while simple hand mechanisms were fabricated to puppeteer the Clods. Due to Ned’s impressive size, a sturdy metal rig was created to puppeteer him.  One puppeteer sits inside the puppet’s body to control gross movements of Ned’s head and body.  There are also puppeteers moving his four arms, as well as two puppeteers using the Puppetry Control System to perform his facial expressions.

BETI was designed using the Unreal game engine to allow for realistic lightning effects to be rendered in real time. She is also rigged to be able to change forms, from a humanoid face to a horrifying monster with the touch of a button. BETI is projected onto a screen behind Ned throughout filming. Camera tracking is also used to help her position align in 3D space so that the environment behind her appears as though it is an actual room in the ship.

The first season of the series was shot at The Jim Henson Company in Hollywood.  Six wranglers plus two programmers were on set every day to make sure the puppets were all camera-ready, functioning well and rigged with the appropriate props for each segment.